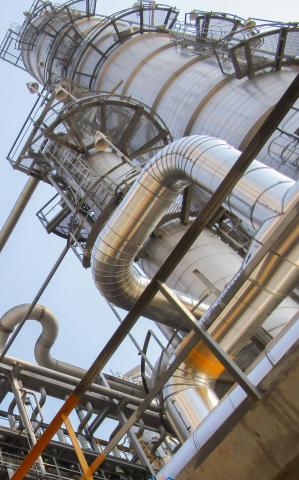 For the next few weeks we're going to deep dive into our Chemical E-Book, our first topic is: Ovens & Dryers.

Many chemical processes involve coating a product with a flammable solvent or mixture of solvents and then run through an oven to dry the solvents. At this point an explosive level of vapors is possible and needs to be monitored.

In addition to the solvents the atmosphere may also contain moisture, resins, halogenated hydrocarbons, silicones and other unknown substances.  Danger is present when hazardous buildup of flammable vapors in the atmosphere gets rich enough to ignite or explode, another crucial reason for LFL monitoring.

For a more detailed look at this application, check out these case histories:

Take the following customer example, a manufacturer of synthetic resins & plastics materials, has a four zone oven process through which a 60" wide film is transported for drying purposes.
There is a danger of an explosion from the buildup of solvent vapors in the oven dryer atmosphere. This buildup could occur by a malfunction in the production process such as: a sudden or improper amount of coating, a change in ventilation controls or excessive speed.
In any of these cases, the concentration of flammable vapor has an opportunity to rise above safe levels, creating a potentially explosive mixture of vapor in air.

Another customer oven & dryer example:
One of the world's largest manufacturers of chemicals uses a process where film is coated with a mixture of solvents & resins and then travels through a drying oven where the solvents are evaporated off. Solvent laden air is collected and sent to an oxidizer for destruction. The coated film is further processed, metallized, stripped and reduced to its final product.
The challenge is preventing a buildup of flammable solvent vapors that could cause an explosion in the oven. They needed an analyzer that could handle the resins present in the sampling atmosphere. These resins could condense out and cause clogging if not kept in the vapor state.